During September and October, the Green European Foundation, Sociedad Española de Agricultura Ecológica y Agroecología (SEAE), La Casa Encendida and Transición Verde have carried out a series of five round tables under the title “Towards a fair and sustainable food system” in which we’ve tried to highlight the complexity and social and environmental impacts of the predominant global industrial agri-food system and, at the same time, show viable, fair and planet-friendly alternatives.

Our colleagues in La Casa Encendida have created a playlist on their youtube channel containing the videos of all the sessions in Spanish and English. Matilde Buergo was in charge of the interpretation. 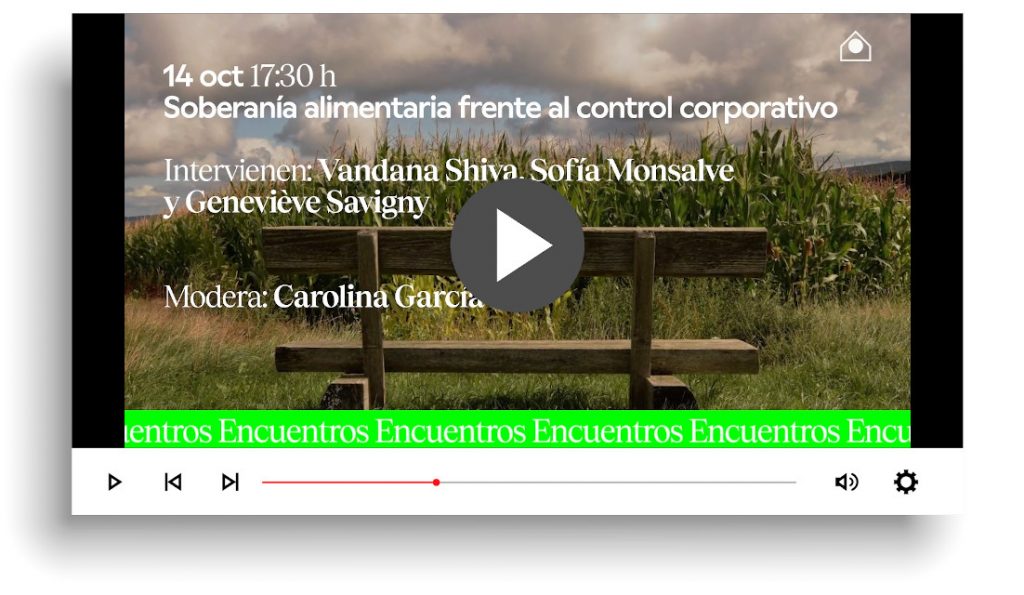 In the first session, on 21 September, we talked about soil: “Protecting the soil: the great challenge for agriculture“, with Pilar Andrés, Ray Archuleta, Andrzej Nowakowski and Andrés Gómez, moderated by María José Payá.

In the second, on 28 September, it was the turn of water: “The challenge of water“, with the participation of Pedro García, Celsa Peiteado and Concha Fabeiro, moderated by Julia Martínez.

The third, on 7 October, analysed what is often hidden in the production of certain food products such as animal feed or those from industrial aquaculture: “The hidden cost of cheap food“. Olga Kikou, Nazaret Castro, Natasha Hurley and Thomas Waitz, moderated by Lidia Ucher.

The penultimate session, on 14 October, was an analysis of large food corporations, their influence and their ability to jeopardise food sovereignty: “Food sovereignty vs. corporate control“. On this occasion, we learned from Vandana Shiva, Sofía Monsalve and Geneviève Savigny, moderated by Carol García.

And finally, a fifth session, on 21 October, focused on “The transformative potential of agroecology“, with the participation of Andrés Muñoz, Aina Calafat, Margarita Hernández, Raquel Ramírez and Fabiola Pérez, moderated by Helena Cifre.

The aim of the series was to show a panoramic view of how the extractive food system currently works, based solely on profit, and how it threatens the future of the very basis of agriculture and the whole of life, the soil and water; we talked about what is hidden behind the production of certain foods and analysed the extent of the tentacles of large corporations; as well as beneficial alternative models.

National and international figures such as the Indian Vandana Shiva or the American Ray Archuletta have accompanied us throughout this month with their analyses and proposals and have taught us that there are reasons (many) to be concerned, but there are also many reasons for optimism. The food model can be changed. We all have the capacity to demand policies that make change possible, but also, as individual consumers, we have a very powerful tool: our decision of what product to buy and the decision not to waste food. The industrial agri-food model is at odds with the very foundations that sustain it and we must change it collectively, but without forgetting how the economic system works and the power and capacity of influence of corporations.

We’d like to thank all those who registered for the series and attended the sessions. In all of them there was a lot of participation and interaction in the chat and we had the feeling that there was a desire for more from the attendees. This is a very good sign for the organisers and encourages us to continue working and addressing fundamental issues for the future of life on the planet.

We’d also like to take this opportunity to thank our members, who make it possible for us to offer so high level activities free of charge and open to the public. We encourage those of you who are not members of the foundation to support us in this work of developing critical thinking and proposing alternatives. A task that seems more necessary than ever in this age of social networks and fake news. You can become a member or make a one-off donation to help us continue our activities.